Obama on nudity, drag-racing and how to write: 20 details from Maraniss’ ‘Barack Obama: The Story’

In the forthcoming biography "Barack Obama: The Story," due in bookstores June 19, David Maraniss tells the largely untold story of Obama's family, his life growing up in Hawaii and Indonesia, his journey through college in California and New York, and his years as a community organizer on the South Side of Chicago.

Here are 20 details from Obama's life detailed in Maraniss' book: 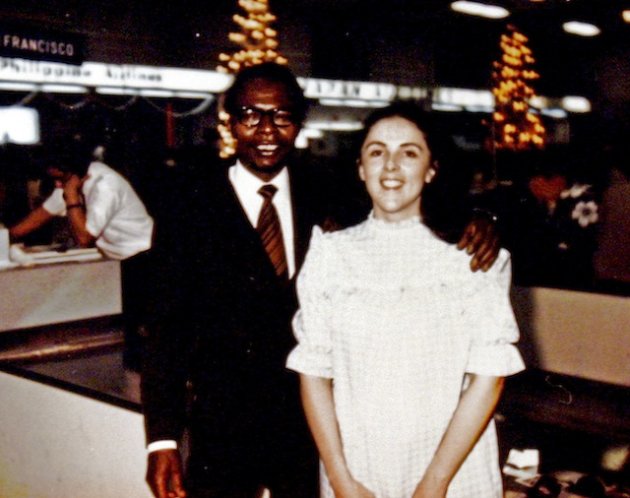 "There is no direct evidence that Obama hit Ann. She never talked about it to her son or family, and in retrospect always tried to give their brief relationship the rosiest interpretations. Bus as we shall see, Obama physically abused his next wife, another American with similar characteristics. This does not mean that he abused Ann, but it leads to that possibility." 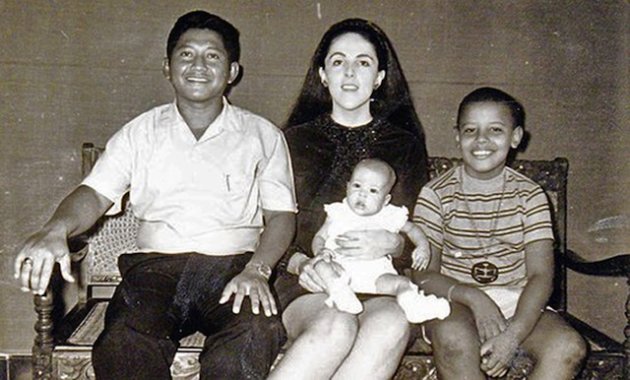 2. When Obama was 6 years old, he moved to Jakarta, Indonesia, to live with his mother and stepfather, Lolo Soetoro, in a home full of exotic animals.

"The backyard was a sight to behold, Lolo's personal Indonesian zoo: Chickens, cockatoos, snakes, turtles, two biawaks (reptiles that resemble miniature crocodiles) in a pond, and a small ape named Tata that he brought back from a mapping assignment with the army in Papua."

3. Obama's presidential ambitions stretched back to the third grade, when he wrote this paper for his class.

My name is Barry Soetoro. I am a third-grade student at SD Asisi.

My mom is my idol.

My teacher is Ibu Fer. I have a lot of friends.

I live near the school. I usually walk to the school with my mom, then go home by mystelf.

Someday I want to be president. I love to visit all the places in Indonesia. 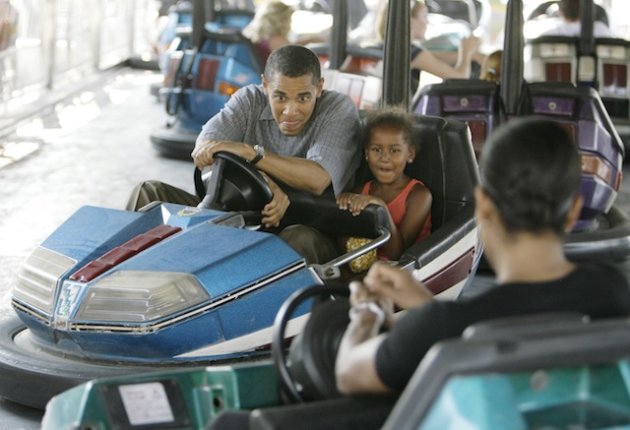 4. As a teenager, Obama was in a car accident while drag-racing in Hawaii.

Obama wasn't behind the wheel of the car, but while he and some friends were racing, the car he was riding in flipped and landed upside down. The other car turned around and found Obama, who had crawled out a back window, laughing hysterically.

"You can't drive for shit!" he kept telling the driver. 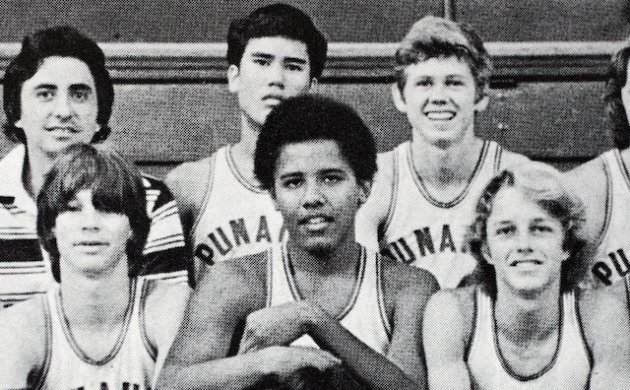 He loved playing basketball in high school, but he was "one of few players on the team" who couldn't jump high enough to dunk.

Maraniss describes Obama's look while he was a student at Occidental University:

"First there was his little toe. It stuck out from the end of his slippers, or flip-flops as they were called on the mainland. His little toe was straight, rather than cramped and curling inward, a sign that his feet enjoyed a liberated existence, unbound by leather shoes. Then there was the rest of his daily uniform: OP (Ocean Pacific) corduroy shorts or denim jeans, a shell bracelet, polo shirts or tees (including one promoting the Hawaii state senate candidacy of Neil Abercrombie...)." 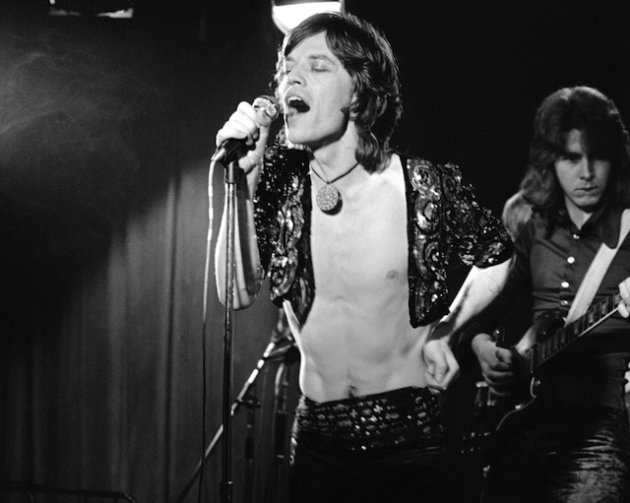 "Barry Obama played a lot of Hendrix, Earth, Wind & Fire, and Billie Holiday, but was known in the Annex for his wicked impression of Mick Jagger. He could do the walk, the strut, the face, and act out the dramatic scene of the Rolling Stones onstage at the Altamont Speedway outside Livermore, California, on December 6, 1969, ..."

8. Obama thought the world would be a better place without clothes, especially when nice-looking ladies were around.

Allegedly stoned and drunk one night at Occidental, Obama and a friend stopped to talk to an attractive girl and "Barry launched into a riff on nudity, offering his theory that the human race would be better off if people did not wear clothes. This declaration was made with the urgency of someone ready to strip then and there. ... It seemed apparent that Barry was trying to seduce the woman right in front of" his friend who had a crush on the girl.

She appeared "sympathetic to the theoretical argument but not ready to put it into practice."

"Mark Parsons said Obama displayed one small trait that showed he wanted to be a player: he wore a lot of 'stupid hats.' He usually wore them cocked, to look cool." 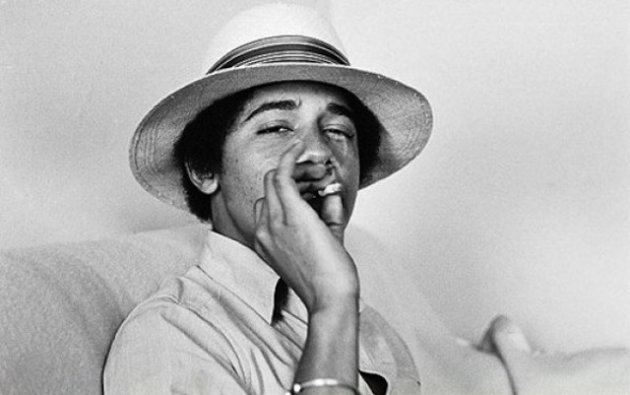 10. In his younger days, Obama smoked his cigarettes like he smoked his weed.

"His friends noticed that Barry had a peculiar smoking style, a little affectation. He turned his wrist up and cupped the cigarette between thumb and index finger. He smoked a cigarette the same way he smoked a joint."

11. Obama joked that he would stop smoking after he got married because it would be OK to get fat then. 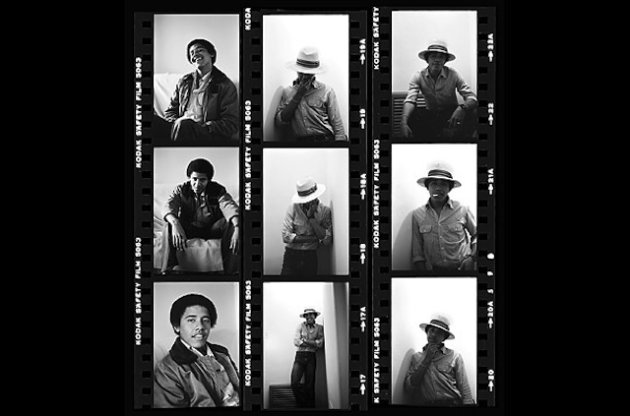 12. The camera loved Obama, and he loved it back.

At Occidental, fellow student Lisa Jack asked to photograph him in her apartment, and Obama stole the show.

"It was one of those times when his ambition was unmistakable. ... He blew smoke like he was on a Bob Dylan album jacket. He put on his hat and cocked it low like he was Jimi Hendrix. He walked toward a heating grate and knelt down like Miles Davis. "These are all his ideas, not mine," Jack recalled. "No one else got up to stand over the grate with a hat on. Nobody. I think he was into it. He was pleased he had been asked. ... In one roll of film Barry goes from innocent baby to Jimi Hendrix to a Black Panther—from having furn to thoughtful to angst."

13. Obama was that guy in college who didn't study much but still got better grades than you.

Friends in his class at Occidental "returned from the library late one night and found Obama lounging on the Barf Couch, smoking."

"'Did you finish your project?' they asked."

"'I've written it,' Obama responded. 'I just haven't written it down.' A while later Barry 'wandered off to the library' and pulled an all-nighter writing a paper that eventually got an A+."

14. Obama was known to show compassion to those who seemed lonely or different.

Friend Kofi Manu said, "Obama was especially friendly to people who seemed lonely or felt a sense of otherness. ... 'If you are alone he will come up next to you and engage you in conversation,' Manu recalled. 'People would say he was engaging, but I would say it differently. He comes to you. He is drawn to people.'" 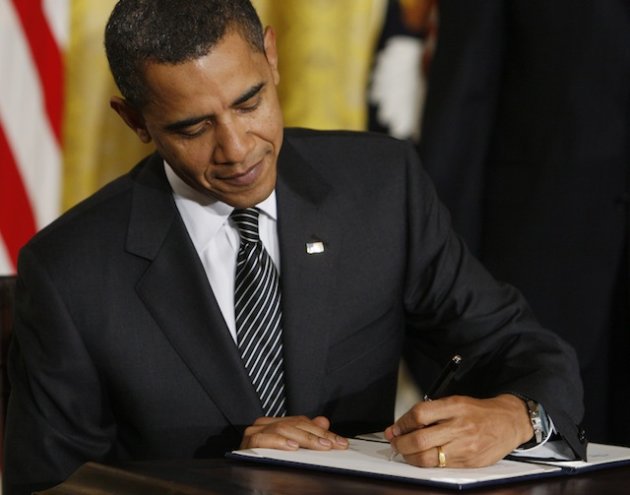 A friend sent Obama a manuscript for editing, Obama wrote back with five tips:

1) "Careful about too many adverbs, particularly describing how people speak (Paul asked disbelievingly, etc.) It can be cumbersome and a bit intrusive on the reader"

2) "Resist the temptation of easy satire ... Good satire has to be a little muted. Should spill out from under a seemingly somber situation."

3) "Try to get the basic stats on the characters out of the way early {Paul was 24} so that you can spend the rest of the story revealing character."

4) "Think about the key moment(s) in the story, and build tension leading to those key moments."

5) "[W]rite outside your own experience ... I find that this works the fictive imagination harder."

16. Obama slept outside in an alley on his first night in New York.

"Obama arrived in New York a week before [his roommate], but when he reached 109th Street he did not have a key to the apartment and could not find anyone to give him one. He spent his first night in the big city outside, curled up in a nearby alleyway, and woke up with a white hen pecking at his face."

17. Obama says he wasn't very interested in running for office during his college days.

"I don't think I could see a clear path [to the presidency]," Obama told Maraniss in an interview for the book. "At that age I was much more interested in being a leader outside of politics. If you had asked me during that time what kind of career I'd love to have, more likely I would have said something like a Bob Moses [the civil rights leader], maybe with a slightly higher profile than that. ... I would not have precluded politics, but during that period I was pretty skeptical of it. There weren't a lot of political figures at that time that I particularly admired." 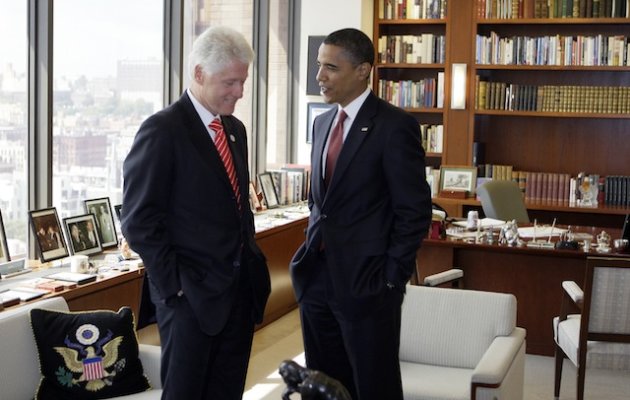 18. When it came to social life, Obama was friendly, but he was no Bill Clinton.

"When you'd see him walking in the hall he always looked like he was thinking of something. ... He was interesting. He didn't talk to everybody and know everybody's names. He was not gregarious. It was more that he was obviously very aware of other people and their surroundings. ... He just seemed really engaged in what he was working on."

"Wherever he went in Chicago, he had a pen and notebook with him. He constantly jotted notes or doodled. Since his lower school days at Punahou, when he got into superhero comics, he had shown a penchant for sketching figures and faces. 'He was always doodling, drawing, writing. He could draw,' Loretta Augustine-Herron recalled. 'He could draw when we were in meetings, thing like that. He usually had a legal pad.'"

20. How Obama liked to chillax.

From a postcard Obama sent to friend Phil Boerner while he was back in Indonesia: "I'm sitting on the porch in my sarong, sipping strong coffee and drawing on a clove cigarette, watching the heavy dusk close over the paddy terraces of Java. Very kick back, so far away from the madness."